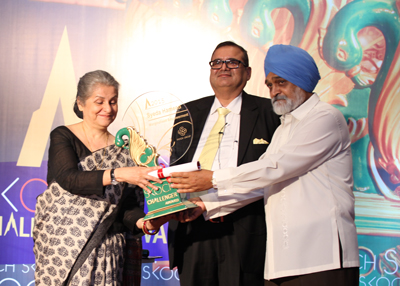 Given away by Mr Montek Singh Ahluwalia, Hon’ble Deputy Chairman, Planning Commission on 25th Day of March 2013 at New Delhi

She has devoted her lifetime to promote the cause of the marginalised. She has worked incessantly towards the eradication of all manifestations of caste discrimination, caste violence, SC and ST discrimination and the elimination of manual scavenging while working to create a public understanding of equality, rights and dignity.

Her career demonstrates a long-standing commitment to sustainable development and education of women, particularly Muslim women in India and South Asia. She is Syeda Hameed, who, tirelessly for last three decades, has furthered the cause of the marginalised and gender.

She has been actively involved in several grassroots organisations to get a first hand feel that is reflective of her work at the Planning Commission, particularly the 12th Five Year Plan. This has inaugurated an era of zero-tolerance for caste-based discrimination against SC and ST women. Gender mainstreaming and development has been the core of her work.