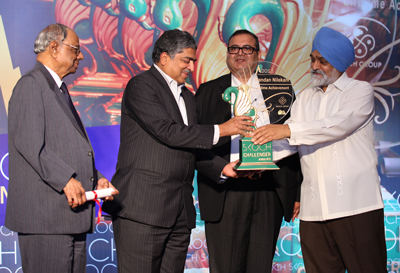 Humility, generosity, compassion and commitment are a few words that describe Nandan Nilekani. Born in a middle class family, he grew as a fine professional to lead India’s largest IT company – Infosys. But his hunger to serve the country did not satiate. He is perhaps one of the largest donors to IITMumbai that helped build the School of IT, hostels etc. but chooses to remain silent about it. It is equally difficult to find mention of half-a-billion rupees donation to Indian Institute for Human Settlement. Still, he always imagined of doing more and to start with captured his thoughts in the book – Imagining India. His dream of each citizen having an ID turned true when he was put in the drivers seat for providing an identity to each resident of India. Nandan started from scratch and put together a committed team. Having no experience of working in the government, he steered the project through thick and thin, political opposition, policy roadblocks, facing media, civil society and disparate interests but stayed firm and continued to wade through steadily and undeterred, calming all opposition.

The government now plans to use Aadhaar for direct benefits transfer using bank accounts thus in the process spurring financial inclusion. Using Aadhaar, a number of states have identified a significant number of bogus beneficiaries. For the first time in the history of India, the beneficiary databases are being updated and cleaned. There is hope for actual beneficiaries to receive real benefits.