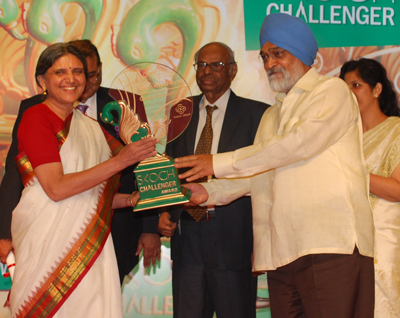 Ruth Manorama is one of the most effective organizer and advocate for Dalit women, belonging to ‘scheduled castes’ sometime even called the ‘untouchables’. She was born a Dalit. Her parents escaped the worst consequence of being Dalits and a minority. But it left an indelible impact on her while she grew and started to organize marginalised women, unorganized labour and Dalits. She helped organize a public hearing on Violence Against Dalit Women in Bangalore in 1993, which led to the creation of the National Federation of Dalit Women. In the process, she has worked with slum dwellers, mobilised them to fight for their rights, and has become a voice for Dalits for affirmative action. Working for the deprived, she has organised peaceful mass demonstrations of hundreds of thousands of people. She has worked with women living in slums, trained and empowered them to face the issues like violence, discrimination and deprivation on their own. Adopting non-violent methods, she has mobilized and unionanized women workers to fight for minimum wages.