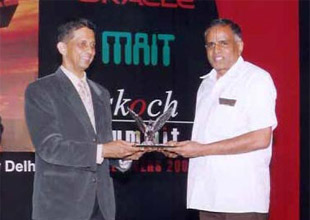 No, management guru Peter Drucker hasn’t joined the IIIT in Bangalore. But in Fortune magazine’s January issue which talked of outsourcing to India, Drucker said the “technical graduates of IITB are as good as anywhere in the world.” Pretty good for an institute which, till six months ago, didn’t even have its own campus. On August 18, last year, it re-located to opposite the Infosys campus – according to its director Prof S. Sadagopan, “When we moved Murthy told me ‘I’m lending you my name for a few years, after that, people should say Infosys is opposite the IIIT campus’!” The principle of IIIT Bangalore, says Sadagopan, is that, unlike a typical bricks and mortar industry, marketshare follows mindshare. So, once you create excellence in learning, the country’s share of the global knowledge industry will increase automatically. IIIT Bangalore has three types of research. The more traditional type like computing and research in embedded computing.

The second and third type are more aligned to industry, but aren’t really industry specific in the sense there are projects in mobility and automobiles. Daimler Chrysler, for instance, has provided significant funding to IIIT B to do research in the auto sector which, according to Sadagopan, is increasingly becoming a case of ‘chips on wheels’. Currently, there are 11 focussed labs in IIIT and 8 research centres dealing with areas ranging from distributed systems to DNA.

Last year, Prof Talukdar (affectionately known as Mr Wireless, as opposed to Dr Das who’s known as Mr Wire) and his students won a GSM award worth $50,000, and thanks to this, half a dozen telecom firms came and took part in IIITB’s placements this year!

IIIT Bangalore’s full-time alumni of around 250 students are today placed in key positions in top firms, both in India (Infosys, I-flex, TCS, etc) as well as abroad (Cisco, Sun, IBM, and so on).