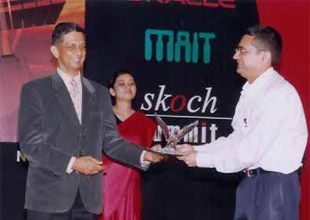 Forget e-choupals, use the e-phone  Over six million Indians, and their families, have direct knowledge that Reliance Infocomm has changed the face of India’s mobile telephony by offering voice-connectivity at never-before prices. But what even few of them know, and that’s why the company’s been chosen for a Skoch Challenger Award, is that Reliance Infocomm is fast emerging as India’s biggest, and best anytime, anywhere internet provider. And that too, on a mobile platform. That’s right, use the internet on your Reliance mobile, and the speeds are several times faster than those on ordinary dial-ups, they’re not too far behind speeds available on some DSL and Wi-Fi type systems which cost a lot more.

Reliance Info, of course, is not an internet firm, it’s an application provider. In fact, while the company’s phone has grabbed the limelight, the company plans to get the bulk of its revenue from the applications business. By the end of the year, according to Infocomm chief Mukesh Ambani, Reliance’s internet services will be available across the country, in over 5,000 cities and towns by end 2004.

Along with this, are plans to set up special facilities for different groups of people. So, small firms who have no video-conferencing facilities will be able to do so in dedicated corners of Reliance WebWorlds, accounting packages will help take care of SMEs who don’t have dedicated accountants, and so on. As Ambani puts it, the company’s vision for SMEs is to leapfrog them from a no-computers environment to fully-networked computing. Keeping track of bills/inventory, even transferring of funds within a few seconds, are applications Reliance is working on with about 70 software firms including those like Wipro and IBM. Specialized applications for other sectors, like education and medicine, are also being designed. A unique partnership, with Ramco, is on to try and eliminate long queues at Tirupati, and the idea is to provide devotees a flash on their mobiles, telling them the exact time at which they need to arrive for their darshanam.

For farmers, a model is being worked on which would allow them to see the price of their produce in the major markets of the world. The farmer will also be linked to commodity exchanges, and a major part of the application will also be to help the farmer actually execute the transaction. Kar lo duniya muthi mein!