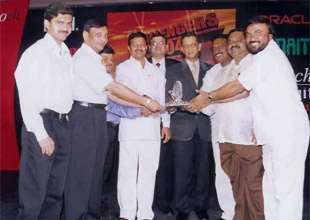 Representatives of KDMC receiving the Skoch Challenger Award for Impact in e-Governance from Dr S Narayan, Economic Advisor to Prime Minister of India

Walk in to the CFC, the citizen’s facilitation centre, and it looks a bit like a Citibank counter, even better, for the lady typing in your particulars on the computer has a parallel screen facing you, so you can figure out just what she’s doing. Step into one line, any line, and you can pay any bill, from water to electricity and even property tax dues, a facility not even offered in the country’s capital. Getting birth/death certificates, a nightmare in most parts of the country, takes all of 5 minutes. And yes, just a few days ago, the Kalyan Dombivli Municipal Corporation became the country’s first municipality to have an internet payments gateway. That’s right, Dombivli, a lower middle-class suburb, 60 km away from Mumbai, has logged on to the bright new world of e-governance, and a total of 13 lakh transactions have already been carried out on the system so far.

Wonder of wonders, even the opposition parties in the area are strong supporters of the project – so when some of the municipality workers, who’re now forced to work, gather to protest every evening, no one’s really bothered. Enthused by the progress of the scheme, the government of Maharashtra has decided to extend the CFC project to many more municipal corporations across the state.