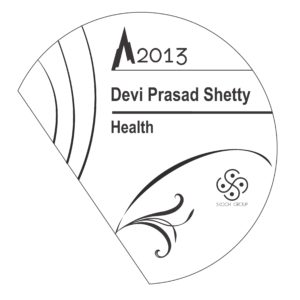 Given away by Mr Montek Singh Ahluwalia, Hon’ble Deputy Chairman, Planning Commission on 25th Day of March 2013 at New Delhi

Devi Prasad Shetty is redefining healthcare services in India. He has pioneered the concept of low-cost cardiac care wherein an open-heart surgery can be performed at as low as Rs 75,000 – nearly one-fourth the cost of doing so in a corporate hospital. It is no magic or miracle but just innovation.

Shetty, a decade ago, convinced the Karnataka Government to launch a microhealth insurance called Yeshaswini and convinced 1.7 million farmers to contribute Rs 5 per month and the state government became a reinsurer by paying Rs 2.5 only. With that scheme Shetty networked with 400 hospitals across the state where these farmers could get a heart or brain operation. The number today has swelled to 4 million thus further reducing the cost of surgeries. Narayana Hrudayalaya in Bangalore runs one-of-its-kind pediatric cardiac unit – also the largest – with capacity to perform over 60 cardiac surgeries in a day. With a target to serve towns with population below one million, Shetty is now building 100 low-cost hospitals. The first of these has been built in Mysore.